Highlights from my first week abroad…

Hello Brazil, where are my bags?

Well of course my first experience in Brazil was watching over 200 people get their luggage off the baggage carousel and waiting in vain for an hour only to be told my bags never made it on the plane. Sigh. I’m not sure what it is about traveling into the southern hemisphere but it seems as though whenever I venture south my bags never follow me across the equator. Nonetheless, I am happy to report that I made it here in one piece and my bags eventually followed suit a day and a half later.  Other than having to explain to people in our group that I’m not actually “the dirty kid” who wears the same shirt for two and a half days (one person asked me if I was really wearing the same shirt I was dancing in the night before…HA!), losing my bags wasn’t a big deal and makes for a great déjà vu story (South Africa 2010). All in all the trip down here went fine and seeing as I am relaxingly sitting out on a balcony in gorgeous 80 degree weather it’s hard to care all that much about temporarily lost bags! 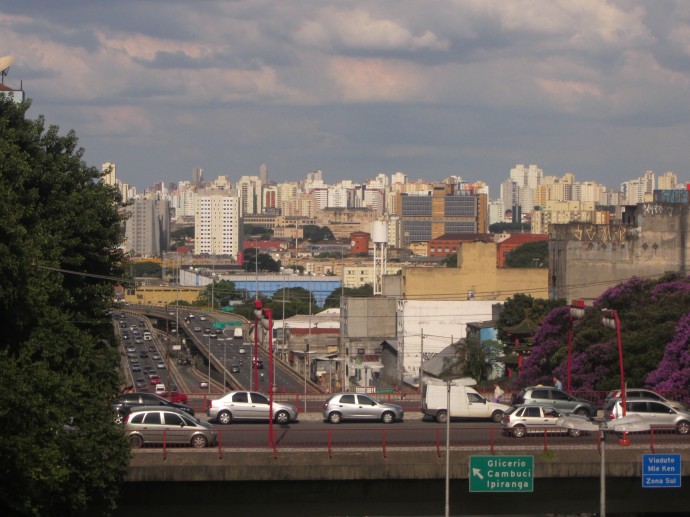 Gigantic. Humongous. Gimongous!! All of these words (or made up words) aptly describe my initial impression of the largest city in the southern hemisphere. Seriously, with 20 million inhabitants, São Paulo makes New York seem small. There is no well-defined downtown area so the city’s high rises sprawl as far as the eye can see in every direction. Other than the sheer size, I have to admit that my initial impression of São Paulo was that the city seemed kind of dirty, run down, and full of smog. However, what São Paulo lacks ascetically, it more than makes up for in culture, weather, and NIGHTLIFE. I’m not sure if people here are just samba dancing zombies or they simply function really well without sleep but Paulistas seem to be out and about having a good time every night of the week.  Also, given São Paulo’s slightly concrete feel, it was interesting to see the abundance of street art throughout the city.  In many ways it seems like the street art functions as one of the means by which Paulistas have developed a distinctive cultural feel in an otherwise highly industrialized, business oriented, and (let’s be honest) ugly city.

In terms of sightseeing highlights I would have to say that my favorite experience was going to the Museo de Lingua Portuguesa (Portuguese Language Museum).  Despite my initial reluctance to go to a rather mundane sounding museum, I am sure glad did. They had a special exhibit on Mario Oswald Andrade (wait…who????) and despite my initial ignorance of this apparently central figure in Brazilian history, I eventually found out that he was basically the father of the modern art movement in Brazil and one of the central figures who encouraged Brazilians during the 1920’s to reject trying to “be European” and instead take pride in their unique multi-cultural heritage.  For generations Brazilian writers had used Portuguese Portuguese to write as opposed to Brazilian Portuguese (which many in Portugal derided as a childish and imbecilic form of the language).  Long story short, Andrade came onto the scene and said “I’m Brazilian, I speak like a Brazilian, and dammit I’m going to write like a Brazilian.”  I think learning about all this gave me a really important insight into an aspect of Brazilian history that will be useful to think about throughout my time here. Also, it’s kind of amusing how the script has been flipped on the Portuguese…but that’s a story for another day.

Overall, even though it wasn’t ideal to feel like a bonafide gringo tourist for 5 days (I might as well have tattooed “GRINGO” on my forehead as we were escorted around the city in a sightseeing bus on our first day), I can happily report that I managed to see quite a lot of the São Paulo, learn a few really interesting things about Brazil, eat phenomenal food (+ drink the best and cheapest Caiparinhas ever), and dance my socks off when the opportunity presented itself. It kind of sucks that all the cool people I met at orientation over the past five days are about to fan out throughout the country, but nonetheless it’s nice to know that I’ll have many a couch to sleep on during my travels and a really great support group of friends all over Brazil.

A few exciting things on the horizon:

I met a 28 year old Fulbright scholar and self-proclaimed “fish guy” who is also going to be Santarém over the next nine months. In addition to Donovan (the other ETA who I will be living with) and one of ETAs from last year who stuck around (good sign?!), that gives me exactly three people who I know in Santarém.  Not bad for a city of 200,000 located deep in the Brazilian Amazon. Also, according to various sources Santarém is REALLY hot and humid. One American I met actually went so far as to say, “it’s as close to hell as I’ve ever been…northern Africa and the Middle East have nothing on Santarém.”  So yeah…should be an interesting nine months without air conditioning.  I’m guessing that my largest expense (other than housing) is going to be sunscreen…either that or aloe lotion. In other news, I’ve officially decided that I am going to take a samba dance class in order to become a gringo samba-dancing machine.  I’m totally into this idea because 1. samba is awesome and 2. I need to prove that my “Sockhop” dance victory in fifth grade wasn’t a fluke.  Anyways, it’s time to head into the Amazon…grab your sunscreen, mosquito net, and meflouquin…vamos embora!