Patience is a Virtue

Alter de Chão: Day Trip to the Caribbean of the Amazon

Alter de Chão is everything Santarenos make it out to be and more.  This Sunday I headed out to the beach paradise town I’ve heard so much about over the past two weeks.  It feels like each and every day I talk to somebody from Santarém and they ask me “Conhece Alter?” Finally I will be able to answer “Sim, conheço!” One thing I’ve learned during my various adventures abroad is that places locals actually go to vacation are usually worth checking out.  Brazilians from all over visit Alter and consider it one of Brazil’s best-kept secrets.  I couldn’t agree more.  Located just 30 minutes and 2.50 Reias by bus from Santarem I can promise you one thing…I’m going to head to Alter whenever I need a little fun in the sun.  Hanging out in one of Brazil’s best beach towns…I can deal…

My day in Alter actually started quite miserably.  Five friends and I had planned a trip to a time warp jungle town named Belterra (which is apparently a weird slice of 1960’s America in the middle of the Amazon).  Unfortunately, bus and logistical mishaps foiled our plans and we decided to try to salvage the day by making an impromptu trip to the Caribbean of the Amazon.  One thing I’ve learned (and improved at remarkably over the past few weeks) since I’ve been here is that patience is key to the Santareno way of life.  Things happen that you don’t expect or plan for…but you just need to wait, be patient, and trust that things will work out.  Being a Bostonian I don’t profess to be a particularly patient person.  Nonetheless, I think my ability to go with the flow is steadily improving and greatly enhancing my overall experience here (plus without patience this place would be pretty unbearable at times).  I’ll never be the world’s most patient person (as many who read this blog can attest to), but I definitely feel like I’ve learned to turn on the “P” switch a little better since I’ve been here.

Anyways, after a morning of bus frustrations we managed to hop aboard a bus headed for Alter de Chão.  We arrived around noon and headed straight for the beach.  The most distinctive feature of Alter is its long sandbar.  During the dry season (which is not now) the entire sandbar is exposed and restaurants, bars, and beach chairs emerge as the water goes down.  Despite the fact that we are currently in the midst of one of the wettest rainy seasons on record, Alter is still an incredible place to visit.  Part of the sandbar is still exposed and visitors are able to hop aboard a canoe or small boat to reach it from the main part of town.  We spent the majority of the day lounging around, swimming in the 80-degree water, and eating (I ate the piranha’s next of kin…and it was great actually).  Not bad for a day that looked like it was destined to be one giant fail.  As nice as the beach is, I think my favorite part of Alter is its unique, relaxed vibe.  People in Alter take chill to a whole new level.  Nobody seems in a rush and everybody is friendly. Even though Santarem isn’t exactly a fast placed place, it’s definitely nice knowing that whenever I need a quick getaway I can always head to Alter for a little R&R.

Despite all of Alter’s many great qualities, I think there is one aspect of my experience there that I will never forget: the sunset (yes that may sound corny…but you’d say the same thing if you’d seen what these eyes have seen).  I’ve watched lots of good sunsets in my life in a multitude of places.  The sunset I witnessed over the Amazon on Sunday ranks up there with the very best of them and is something that even pictures cannot do full justice to.  Nonetheless…here are a few of my best efforts (and my friend’s best efforts)… 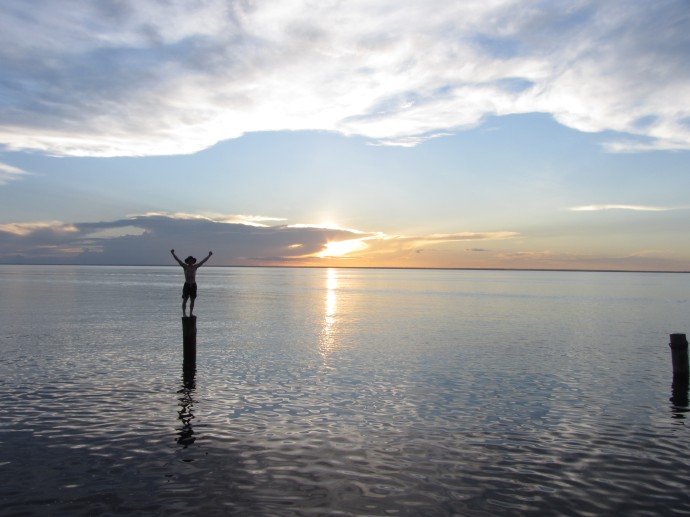 Teaching: Finally doing what I get paid for…

I guess I’ve left the ranks of the unemployed.  Well sort of. 10 hours a week of being an English teaching assistant isn’t exactly what one might call arduous work but it’s work nonetheless and I at least feel like I’m doing more than eating churrasco and sleeping in my hammock during the day.  I’m definitely not complaining.  Once the 3 hour a week class that Donovan and I will be leading starts up next month I’ll have to spend a whole lot more time lesson planning so my current “workload” (if you can even call it that) is a nice little transition before things heat up both literally and figuratively.  Also, all of this free time has given me the opportunity to plan out my side project, which is going to begin next month and is going to occupy a good deal of the week (spoiler: public health, indigenous communities, grassroots, NGO). Anywho, here are a few tidbits from my first week on the job:

1. Professors picking up their phones in the middle of class is totally a thing here.  No joke…Valdenildo, one of the professors that I’m assisting on Tuesday and Thursday nights, pulled out his phone smack dab in the middle of our first class and started shootin’ the s*** with one of his friends.  The amazing thing: Not one student in the class found it odd…except for me of course.  Donovan had the same thing happen to him in one of his classes last week as well.  Not gonna lie…totally off-putting at first. That’s what you call a chilllll classroom atmosphere….which brings me to my next thought…

2. Cats invading the classroom and cuddling with students may not be a thing here…but it definitely happened during my first class.  This little fella entered about an hour into class:

…nobody seemed to care…except for me…who picked up a camera and snapped a photo.

3. Pinch hitting during my first week on the job…nerve-racking and exhilarating.  Sadly, one of the English teachers at school had a serious family tragedy occur last week and returned home on a somewhat indefinite basis.  Maria Luiza (our main contact at UFOPA) asked Donovan and I to fill in for the next few weeks until she returns. We’ll be working with a group of 13 English teachers from around the area for four hours on Saturday mornings.  I won’t lie I was pretty nervous heading into our first class…I’d never sat through a four-hour class before, let alone taught one. Nonetheless, I’m thrilled to report that my first foray into actual teaching down here was a smashing success.  Before I had my teaching floaties on I jumped into the deep end…off the high dive…and swam!

1. A big, huge, gigantic, bugegantic (again my blog) shout-out and congratulations are in order for Matt and Julia! Within a matter of 24 hours Julia was accepted into Harvard for public policy and Matt was placed into NYU’s residency program.  It’s safe to say that my parents are walking on water at the moment.  Two of the ducklings are going to be pretty close to the nest for the next few years…maybe I’ll have to set up shop in Antarctica once I’m done in Brazil just to balance things out.  Also, given the unfortunate news from the prior week, it was definitely nice to hear about some truly exciting happenings on the home front. Virtual abracos all around.

2. Even though I’ve been here for well over two weeks there are still 2-3 times a day when I am forced to think to myself “where the “bleep” am I?” Whether it be two grown men riding down the street on a tiny bicycle (which I am determined to get a photo of because it’s hilarious) or small children in oversized helmets cruising down the highway on the back of a motorcycle (which is just plain crazy)…some things take more time than others to grown accustomed to seeing everyday…but I think that’s part of the ex-pat experience.

3. Washing clothes by hand is extraordinarily time-consuming but surprisingly fulfilling.  If nothing else it’s a great workout…my arms are sore each and every time I do a load.

4. Drying clothes in the Amazon is another matter…a quick downpour means another 24-48 hours of wet clothes (assuming there isn’t another downpour a few hours later).  Patience is a virtue here in oh so many ways.

5. Andyinhat.tumblr.com will be updated tomorrow when I have faster internet access…8 new pictures of me, my hat, and our adventures coming soon!

6. A more comprehensive Facebook picture update will be out later in the week.

Next week expect to here a bit about hammocks, jungle marathons (swamps, leopards…gasp!)…and whatever happens between now and then.

P.S The oddest, most adorable thing I’ve seen in Santarém…a four-week-old puppy being carried in a green plastic grocery bag on the packed bus heading back from Alter de Chão.  I dare say there wasn’t one person on that bus who didn’t smile when they saw that puppy.  Hopefully these photos bring as much joy to the start of your week as they brought to mine…

2 thoughts on “Patience is a Virtue”