And the water continues to rise: 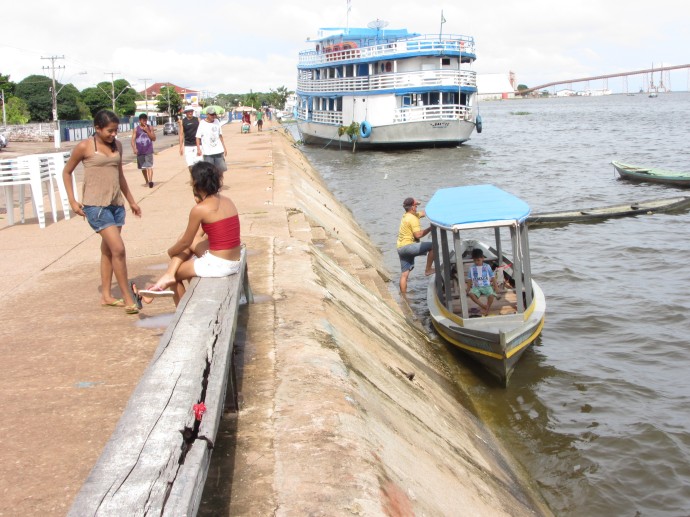 Santarém is going to flood. Thus, it might just be time to begin building an ark because my house is all of 100 yards from the riverfront. How far inland the water will go is anybody’s best guess but just about each and every Santareno you talk to says that it’s going to flood in a month or two.  Apparently, the water has never been this high.  The amount of rain in the region this year has swelled the river to historic heights (visually you can already tell that the river doesn’t look normal).  The only other time the city flooded was in 2009 and apparently the water level in March 2009 wasn’t nearly as high as it is now.

The bad news is that my new digs are in a somewhat vulnerable location and that MIGHT be an issue at some point.  The good news is that I am about to witness humanity’s amazing ability to cope with its environment and get on with life.  As I have said in my previous posts, a good deal of the everyday hustle and bustle of the city is located along the riverfront.  Merchants line the waterfront and the city’s biggest market is just feet away from the river.  One would think the rising river is going to be a big ol’ problem for all of those who use the riverfront to make ends meet.  However, according to various people I’ve talked to, in 2009 merchants literally put their shops up on stilts, threw down a bunch of wooden planks, and returned to business-as-usual.  For a few weeks canoes replaced cars and motorcycles as the riverfront’s main source of transportation.  They talk about the river almost every day on the local news channel and the images of the market in 2009 are really quite astonishing.

My plan is to take a picture every week from the same spot along the riverfront to document the river’s historic rise over the days, weeks, and months ahead.  It should be interesting to witness something like this first hand…above is the first photo I took last Sunday…

Like so many other things here, learning how to sleep properly in a hammock at night takes time and patience…and a bit of ibuprofen.  I won’t lie to you and say that my first night in my new hammock was amazing.  It wasn’t.  Quite frankly…it sucked. I woke up every couple of hours with a stiff lower back because I was sleeping at a weird angle (one problem was that my hammock had too much slack in it).  However, I can happily report that things are on the up and up in my “rede.” If sleeping in a hammock were an art form, I’d say I’ve graduated to the fourth grade finger painting level.  I can sleep through the whole night now and don’t wake up with any significant back pain.  I still feel like I’m not maximizing the coziness of the hammock experience but I think as the days and weeks go by I’ll enjoy it more and more.  You may ask yourself…why not just buy a basic mattress and call it a day (or night I guess)?  Well there are many advantages to the hammock…

The Gringo becomes a Gaúcho:

Well my nickname on the soccer pitch has finally changed. Even though the word “gringo” has no truly negative connotation here (it’s actually a general term to refer to anybody who is not from Brazil…there is a Peruvian who plays with us who is also called “gringo”), I have to admit that I was getting kind of tired of the nickname. When I stepped on the field for the first time there was definitely an assumption that the gringo couldn’t play.  Thus, it’s kind of nice that I no longer have to hear “Gringo, gringo…toca, toca!” or “Gringo…BATA!!”

My latest nickname is “Gaúcho.”  For those of you who aren’t familiar with Brazil, a gaucho refers to somebody from Rio Grande do Sul state, which is located at the southern tip of the country (the word actually means “cowboy” in Portuguese).  Oddly enough people from Porto Alegre are referred to as gaúchos so it is an oddly fitting nickname. You might be asking yourself…how on Earth did I become a gaúcho?  Well, people from Rio Grande do Sul tend to whiter than people from many other parts of Brazil.  Rio Grande do Sul is where a lot of Europeans immigrated to during the 20th century.  Given the fact that I certainly stand out here, my new nickname is not exactly a surprise.  However, the good news about my nickname is that gaúchos are also known for their soccer talents (which gringos are definitely not).  Despite the reality that my new nickname is probably due more to my race than my prowess on the pitch, I can’t help but think that my current scoring streak had a little something to do with it (that’s my story and I’m sticking to it!).

There’s probably a lot more I could say at this point about my experiences with race here…but at the moment I don’t feel that I have been here long enough to be able to say anything about this sensitive topic with even a shred of confidence.  Honestly, I think I need to marinate on everything I’ve observed a bit more before I actually say something concrete about my experiences (wow…thinking before speaking is not always my forte…is another Amazon miracle?…is this what maturity feels like? ). In all seriousness, given the almost tangible impact that race has in Santarém (and Brazil more broadly) and my general interest in the particular topic, I plan on dedicating a blog post to the issue of race at a later date…now just doesn’t feel like the time.  Also, both Donovan and I have been discussing a second side project in which we’d coauthor a piece on our respective experiences with race throughout our time down here (I think we’ve had rather divergent experiences up to this point).  Hopefully we’ll get something going in a few months and I will report back if anything substantive actually comes to fruition!

A brief word on the weather:

Last week I managed to not talk about the weather and I felt like that was an accomplishment (and a small sign that I might be adjusting).  That said, I’d be deceiving myself and my loyal readers (HA!) if I failed to mention the weather this week.  I’ve finally had my epiphany as to why I think the weather is so terrible here: basically, it is clear to me that there hasn’t been (and most likely never will be) what I would consider a nice day since my arrival three weeks ago.  Literally, my favorite weather day was a cloudy, drizzly day…and that’s utterly depressing to me. I’ve concluded that it only either blazes sun or rains buckets when the sun is up. As bad as the extremes of hellish sunshine and torrential rain are, I think it’s been the complete lack of a pleasant middle ground between the two that I find most frustrating of all (I can deal with terrible weather…as long as there is something nice mixed in).  Ultimately, I think I just need to adjust my expectations about what I consider a nice day.  I guess rainy and drizzly is going to have to become the new 80 degrees and sunny (with a slight breeze).  Nonetheless, I have to admit that a small (or large) part of me really wishes that I could have just one day where I could sit outside in a park and read a book, alas.

…I promise not to mention anything negative about the weather for a minimum of two weeks. Scout’s honor! (I never was a Boy Scout so that doesn’t mean much)

…I’ve been here for exactly one-month…ummmmmmmmm…how’d that happen?

P.S Andyinhat.tumblr.com has officially been updated…and a new facebook album has been published.  If you haven’t already…check em out.

One thought on “Time to Build Andy’s Ark?”